Are employers allowed to have employees pay for uniforms? Yes, but employers need to ensure employee wages never dip below minimum wage and...

A recent settlement with The Walt Disney Co. should remind employers to take precautions before automatically deducting employee wages for the cost of uniforms.

Disney resorts charged employees a “costume” expense that made their hourly rates fall below the federal minimum wage. In addition, the resorts failed to maintain adequate time and payroll records and did not compensate employees for pre-shift and post-shift work. As a settlement, The Walt Disney Co. agreed to provide $3.8 million in back wages to 16,339 employees to ensure compliance under the FLSA (Fair Labor Standards Act).

According to Daniel White, district director for the Jacksonville Wage and Hour Division, “Employers cannot make deductions that take workers below the minimum wage and must accurately track and pay for all the hours their employees work, including any time they work before or after their scheduled shifts. We hope the resolution of this case alerts other employers who may be paying employees in a similar manner, so that they too can correct their practices and operate in compliance with the law.”

Are employers allowed to have employees pay for uniforms?

Per the FLSA, employers can require employees to wear uniforms. Uniforms (and not simply a dress code) are typically business expenses that should be covered by the employer. However, the FLSA states that if an employer wants to charge employees for uniforms, they’re able to do so as long as employee wages never drop below minimum wage and that paycheck deductions for uniforms don’t cut overtime compensation. With that said, if uniform costs seem exorbitant, employees are welcome to contact the DOL wage and hour division.

Employers wanting to deduct any uniform costs from paychecks should have a policy (which can be included in the employee handbook) with signed authorization. Deductions can be prorated over time and must be consistent for all employees. Also, anything deemed “Personal Protective Equipment” by OSHA, such as helmets, safety vests, googles, gloves, face shields, and other such protective clothing must be paid for by the employer, per the code of Federal Regulations.

Our advice? Check with our HR experts first to ensure wages are not an issue, that a signed policy is in place, and that there are no state laws mandating a stricter law than the federal stance. 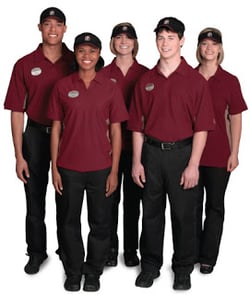 Does “Salaried Employee” Mean the Same as “Exempt Employee”?

"Salaried employee" vs. an employee that doesn't have to track time because they aren't subject to overtime wages -- is this the same thing?

Unauthorized overtime: does a company have to pay?

If managers must pre-approve overtime but an employee works overtime without permission, does the company have to pay for the unauthorized overtime...