Can you still tell a joke at work?

When one person’s humor can lead to another person’s alienation, should you stay all business and refrain from telling a joke at work?

What should you do if you hear an offensive joke at work? Brad gives advice in this #AskanHRExpert video.

Is it still okay to tell a joke at work? While it may seem like a question in search of a punchline, the boundaries of humor at work are a valid concern for most workplaces today, where one person’s humor can lead directly to another person’s alienation.

Does that mean employees should spend their days with their serious-face on? No. In fact, there are proven benefits to humor and laughter in the workplace. According to an article in Harvard Business Review, humor can promote creativity, encourage collaboration, reduce boredom, and improve engagement. And if you’re the one telling the jokes, you appear more competent and even make other people want to work with you!

But there’s a drawback to all that funny if you inadvertently offend someone.

It’s a fact that we live in an incredibly diverse society with an equally diverse set of topics we find funny. So while you might be ready to crown George Carlin as the all-time king of comedic role models, your cube mate may whole-heartedly disagree. Where do you draw the line?

How to deal with offensive humor at work

First, keep this list of “don’ts” in mind. If a joke or comment ventures into any of the following subjects, consider it off limits:

Next, think before you speak. If you think your joke could offend someone, keep it to yourself. Try a knock-knock joke or a pun (my favorite brand of dad humor) instead, which are more likely to earn you groans than a sit-down with HR. Yes, there are exceptions to these, too.

Also, if you hear a joke that you find offensive, tell someone. It’s best to go to the source (the person who told the joke) and let them know that you didn’t appreciate the humor and why. If the thought of confronting the person makes you uncomfortable, talk to your supervisor or HR rep.

If you’re an employer or a supervisor, you have an obligation to ensure the workplace is free of harassment and that employees feel comfortable at work. Whether you hear the joke or someone reports it to you, it’s your responsibility to step in and put a halt to any situation considered offensive. Most often, problems can be resolved by talking to the jokester and asking them to stay away from similar topics in the future. (Tip: it’s usually best not to say who was offended.)

If that doesn’t cut it, then know the boundaries and what’s considered “harassment.” If a joke falls into any of the following categories, there could be legal issues brewing:

Most of the time, the person telling the joke doesn’t realize they’re being offensive. Simply calling their attention to the fact that their attempt at humor offended someone is usually all it takes to stop a problem before it ever starts. Even if you think they have never before and will never again tell an off-color joke, it’s always in your best interest to discuss the situation with the person telling the joke.

If you have any questions about humor in the workplace or what to do when a joke goes too far, please contact our HR experts at HR@stratus.hr. 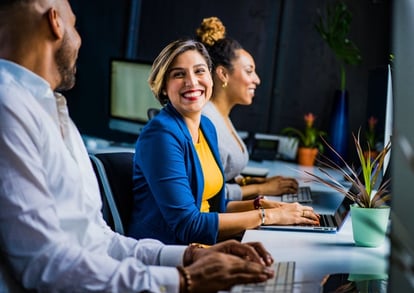 It's all fun and games until somebody's joke hits an offensive button.

In a world where practically everything is searchable online, should employees have a lower expectation of privacy for their personal and behavioral...

Protecting your company from a phishing scam is more than setting up IT controls; it begins with employees safeguarding their personal information.

Tech Center: with visual breakdowns of paystubs and the ability to update personal information or change direct deposit account information...